The following information is for the preliminary planning of a public use, general aviation heliport only. FAA recommendations and standards for helipad design are found in Advisory Circular 150/5390-2C. While the Advisory Circular (AC) provides general design guidance, the AC is advisory only and doesn’t mandate required practices. Flight Light recommends that anyone constructing or modifying a heliport should determine all site-specific requirements and consult with a local FAA representative.

Basic Layout
A heliport should include at least one Touchdown and Liftoff (TLOF) area centered in a Final Approach and Takeoff (FATO) area, a peripheral safety area and two or more approach and departure paths. The TLOF must be at least as long and wide as the rotor diameter of the largest helicopter to use the heliport. The FATO must be at least 1.5 times the overall length of the helicopter. The width of the safety area must be at least 0.33 times the rotor diameter, but not less than 20 ft. (6 m). At least two approach/departure paths, with one aligned in the direction of the predominant wind, are required.

Heliport Lighting
For night operations, the TLOF, FATO, taxiways, taxi routes, and windsock should be lighted. Other useful visual aids include: floodlights, landing direction lights, taxiway lights, a heliport identification beacon, and a heliport approach path indicator (CHAPI). Obstruction lights must be installed where required to mark objects in close proximity to the approach/departure path.

Please note: since the FAA AC does not contain intensity standards, perimeter lights can’t be FAA certified or deemed compliant. 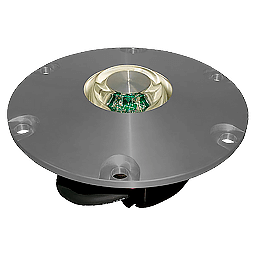 Touchdown and Liftoff (TLOF) Lights
Flush green lights (meeting the standards of EB 87) should be used to define the TLOF perimeter. Use a minimum of four light fixtures per side of a square or rectangular TLOF. Locate a light at each corner, with additional lights uniformly spaced between the corner lights. Using an odd number of lights on each side will place lights along the centerline of the approach. Define a circular TLOF using an even number of lights, with a minimum of eight, uniformly spaced. Space the lights at a maximum of 25 ft. (7.6 m). Locate flush lights within 1 ft. (30 cm) inside or outside of the TLOF perimeter. As an option, raised, omnidirectional lights (meeting the requirements of EB 87) may be used to mark the TLOF perimeter. Locate the lights on the outside edge of the TLOF or the outer edge of the safety net. Make sure the raised lights do not penetrate a horizontal plane at the FATO elevation by more than 2 inches (5 cm). 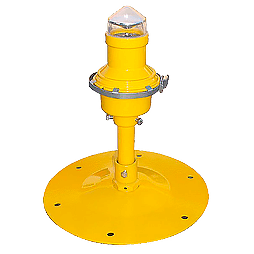 Final Approach and Takeoff (FATO) Lights – Elevated, Inset
Green lights (meeting the standards of EB 87)(with the same candelas as the TLOF lights) MUST BE used to define the FATO perimeter. When a helipad on an airport is sited near a taxiway, yellow lights may be used to avoid pilots confusing the green taxiway centerline lights with the FATO perimeter lights. Do not light the FATO perimeter if any portion of the FATO is not a load-bearing surface. Use a minimum of four flush or raised light fixtures per side of a square or rectangular FATO. Locate a light at each corner, with additional lights uniformly spaced between the corner lights. Using an odd number of lights on each side will place lights along the centerline of the approach. To define a circular FATO, use an even number of lights, with a minimum of eight, uniformly spaced. Space lights at a maximum of 25 ft. (7.6 m). Locate flush lights within 1 ft. (30 cm) inside or outside of the FATO perimeter. As an option, locate raised FATO perimeter lights, no more than 8 inches (20 cm) high, 10 ft. (3 m) from the FATO perimeter. 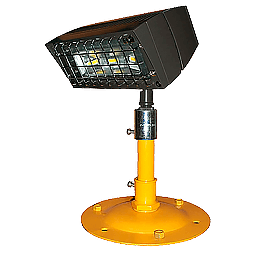 Floodlights
If ambient light does not adequately illuminate markings for night operations, floodlights should be used to illuminate the TLOF, the FATO, and/or the parking area. Floodlights should be placed so they do not constitute an obstruction hazard. Aim floodlights down to provide adequate illumination on the surface. Make sure floodlights that might interfere with pilot vision during takeoff and landings are capable of being turned off by pilot control or at pilot request. 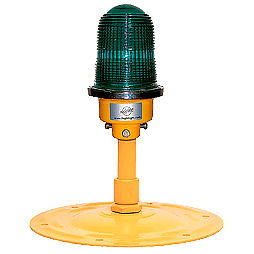 Landing Direction Lights
To provide directional guidance, install landing direction lights – a configuration of five green, omnidirectional lights (meeting the standards of EB 87) on the centerline of the preferred approach/departure path. Space these lights at 15 ft. (5 m) intervals beginning at a point not less than 20 ft. (6 m) and not more than 60 ft. (18 m) from the TLOF perimeter and extending outward in the direction of the preferred approach/departure path. 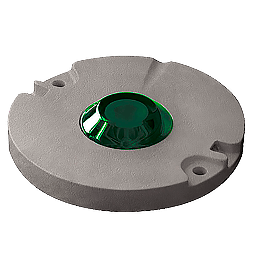 Flight Path Alignment Lights
You may indicate available approach and/or departure path directions by placing green lights (meeting the standards of EB 87) in a straight line along the direction of approach and/or departure flight paths. If necessary, extend the lights across the TLOF, FATO, safety area or any suitable surface in the immediate vicinity of the FATO or safety area. Install three or more green lights spaced at 5 ft. (1.5 m) to 10 ft. (3.0 m). 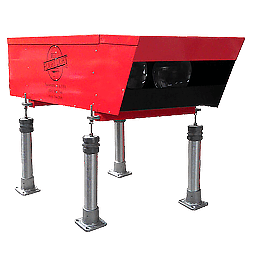 Visual Glide Path Indicator
The heliport approach path indicator (CHAPI) provides pilots with visual course and descent cues. The optimum location of a CHAPI is on the extended centerline of the approach path at a distance that brings the helicopter to a hover with the undercarriage between 3 and 8 ft. (0.9 to 2.5 m) above the TLOF. 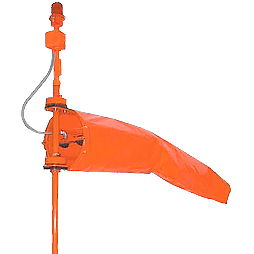 Lighted Wind Cone
To show the direction and magnitude of the wind, an FAA L-807 Size 1 (about 22 ft. overall height with an 8 ft., international orange windsock) is recommended; the L-806 (10 ft. tall) may be substituted. The L-807 has a hinged pole and a rigid base, the L-806 has a frangible base. The wind cone must be placed outside the safety zone and away from flight paths. 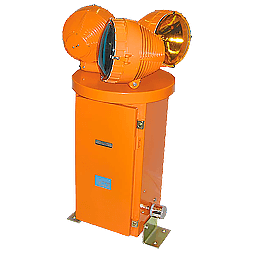 Heliport Identification Beacon
Located within 1/4 mi of the heliport, three sealed beam lights rotate at 10 to 15 rpm to produce 30 to 45 fpm in white, green and yellow. A beacon using Morse code signals is also available. 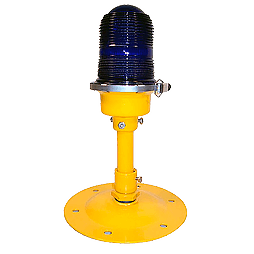 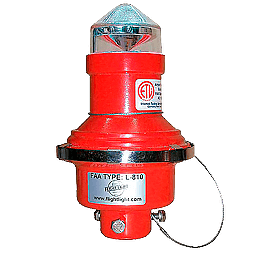 © 2022 Flight Light Inc. All rights reserved.
Nobody Comes Through Like We Do